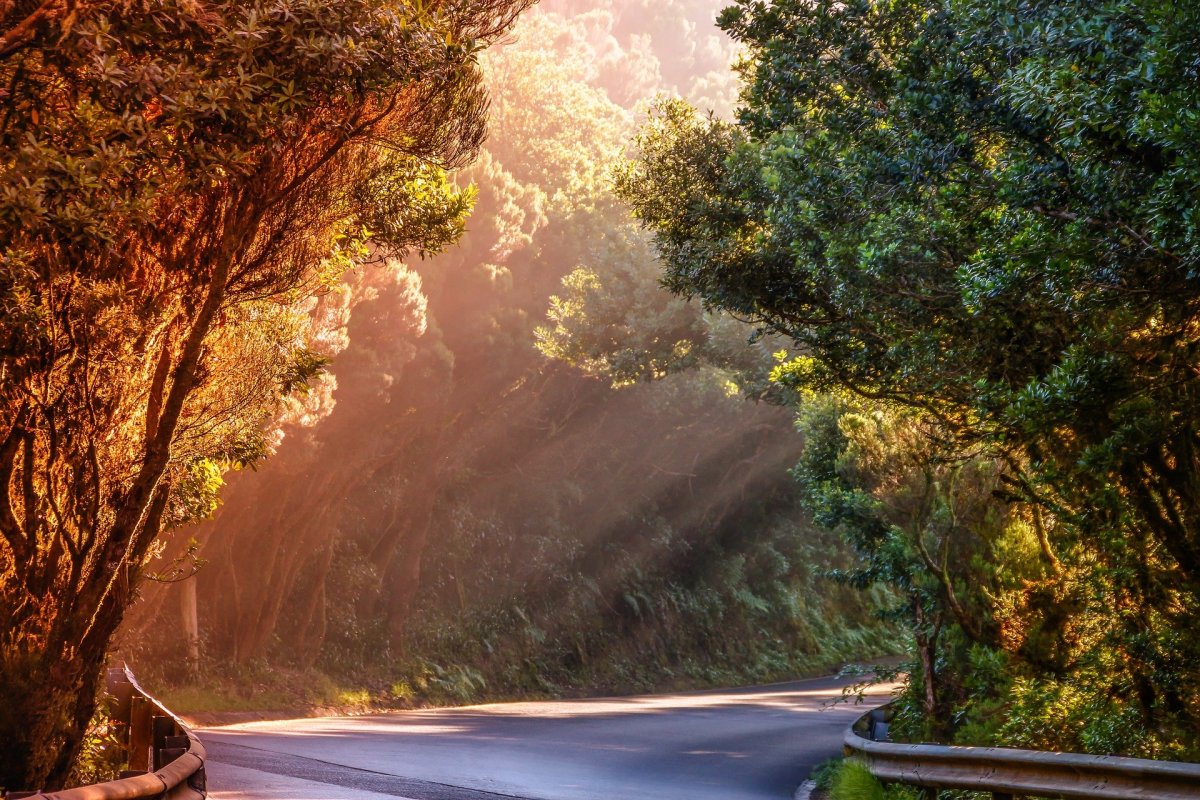 “…a world without bias would be flat and dull and monotonous,” so if you think this pic is oversaturated, maybe the world has too much bias… or could it be you simply see a world with too much bias?

Look at the feature photo, with its glowing colours and rays of magical sunlight, etc etc.

Someone might argue that a certain ‘bias’ is partial to the orange-red colours on the left side while another certain ‘bias’ is partial to the lush green on the right. Even to suggest Fall and Spring is merely my interpretation, and you’d be free to take it or leave it. And fair enough, which is really the point: all of this is simply chocolate-vanilla, everyone with their own preference, which is the broader point I’ve been making: everybody is biased. It’s a trait we all have in common. Not whether you prefer Fall to Spring or vice-versa or even something else, not even about this particular photo because maybe you prefer Winter or Summer, or maybe you prefer real roads in real forests versus photographed roads in photo-shopped forests. But whatever it is you or I or anyone prefers, we each lay claim to our own.

Then we support our claims… as I mention in the photo caption, someone might argue that the colours are just too saturated, that this photo has been edited to make those rays of sunshine seem almost heavenly or something. In my English class, I might have supported this by noting that the photo is taken from the ground-level, not the treetops, or I might have pointed out how the road curves, suggesting some lack of omniscience, as if we can only remember out-of-sight places we’ve been or imagine not-yet-in-sight places we’re going – whatever, it doesn’t matter. Since the photo editor isn’t likely in the room with us anyway, the specific interpretation is not the point so much as simply having an interpretation at all.

We interpret at all because we’re biased, and interpreting is a step in learning. If you don’t value learning, stop reading now, and sorry to have used up your time. But if you do value learning, if you’re curious as to what’s around that curve in the road ahead, then don’t stop here too long, just admiring the trees or basking in the glow: imagine, predict, and wonder, then interpret, then share, and listen and reflect and discuss. That is education. And then follow up further on your own. That is study: imagine, predict, and wonder some more, and come back to interpret, and share, and listen and reflect and discuss, then follow up further on your own… see how this works, this process of study and education and further study and further education?

One outcome of this process would not only be a pretty revealing insight into one’s own character but also the possible character of the photo editor who likely wasn’t even in the room with you:

We can’t know, of course, because even if the editor were in the room with us, they may withhold their particular motives behind this photo. Nevertheless, say we gather a sense of their previous editing work and build a case toward their possible motives in this case, from which we could suggest further possibilities: if (1), (2), (3), and (4) all happen to be true, the suggestion could be that the editor is someone who values heavenly connection. However, if only (3) by itself is true, the suggestion could be that what the editor values is not necessarily heavenly connection but rather the kind of impression they aim to lay upon others.

But bias is not the interpretation you have or even the interpretation you prefer after hearing a few, even if that amounts to Hmm, I’m not too sure just now; this is often attributed to us as our opinion, but bias is more than that. Bias is the plainer fact that – at every given moment – everyone will have some kind of interpretation. Bias is the nature in its entirety that one perspective exists distinctly from any others, the very nature that an individual occupies a vantage, a perch from which to perceive, a point-of-view that cannot be simultaneously occupied by another, except on Star Trek, but only shared with another. Bias is the finite oneness that is ‘you’, which cannot be ‘me’ or any ‘one’ else because we all each have this very same oneness. This finite limitation, this scope of ‘who I am’, this boundary that distinguishes ‘what is me’ from ‘what is not me’, and to which we each lay claim, this is our bias.

Our bias: we can inform it, we can expand it, we can manage our way within it, but we can neither eliminate it nor overcome it because we are not infinite. We might help ourselves feel better by telling each other, “No limits!” especially as this inspirational cheer salutes the fight against social injustice and cultural oppression, which is a current dominant motive, the sentiment of which to encourage and motivate people is appreciable. Yet having opened the door that this perspective opens, where it aims I fear is not where it ultimately leads: “No limits!” suggests infinite capability, which is literally impossible and, thereby, ironic. We are not infinite. We have limits, and the cheer “No limits!” may better be amended to “Educate and study!” But who’d ever shout that, much less put it on a placard or a t-shirt?

If the difference between ‘Our bias is our limitation’ and ‘Our limitation is our bias’ is one of perspective, then it’s also one of misunderstanding or perhaps even simply wishing away human characteristics.

I wrote about something close to this once before, where again a simple reversal of phrase is more than just clever word play. It’s literally about life and living and enacting who we are.

I don’t know why Bible Hub sets its Commentaries page with the King James version – it wouldn’t be my first choice translation, but they list 22 across the top of every page, so take your pick.