If you haven’t yet leaped to conclusions about me, I’ll point out that the full title of this post is “The Bridge to Hell is Paved with Problematic Intention.” It’s meant to be a little satirical, a little disparaging. It’s a wordy mash-up of axioms, cultural and academic. I’m okay with wordy this time.

I’m also conscious of the juxtaposition of my crude title and the wisdom of Dr. King. I’m less okay with this but felt the contrast worth any shock, ambiguity, or misapprehension.

Read on, and take issue as you must or as you will.

The Bridge to Hell is Paved with Problematic Intention

Has the trumpeting of multiculturalism taken itself so literally that even individualism (… multipersonism?) is insufficient?

Taking itself, as I say, more literally, multiculturalism sets one culture at equal stature with the rest – seems fair enough – apparently, a shift in meaning from diversity to inclusion, which implies that diversity wasn’t working on account of exclusion.

So, within Culture X or Culture Y, as we might imagine an individual being equal alongside other members, we can imagine across the two cultures potential impasse: “… unresolvable conflicts between mutually exclusive viewpoints [that] dominate the political landscape” (Benson, 2020). I still grant here individual differences, but I have in mind some divide between distinct communities of individuals, i.e. a divide between cultures.

In relation to Culture Y, for example, Culture X might deem its equality mere lip-service and feel de facto unequal: “How are we in Culture X obliged to consider those in Culture Y as ‘equal’ if our culture is not equal to theirs?

“How can we treat them as equals, much less be treated as equals, if our larger culture is not equal – that is, if Culture Y does not accept us on equal terms?” Culture Y might declare all individuals equal to begin with and counter that Culture X only perceives inequality. Yet this simply compounds the same injustice for Culture X, who will hardly waive their due consideration.

In any case, equality of cultures seems not the same thing and unable to play out to the same effect as equality of individuals – even more so since an individual who identifies with more than one culture might feel strewn across their own intersections. (Curiously, this assumes one’s identity to be chosen as much as bestowed, which echoes individualism as much as collectivism.) In fact, if equating cultures equates individuals, then equality rests further upon equity, a mantle of justice issuing from a superior authority.

Perhaps Culture Y lives by some unproblematic axiom, such as ‘might makes right’, ‘stay the course’, or even just ‘common sense’ while Culture X lives by ‘power to the people’, ‘diversity is strength’, or ‘revolution is no dinner party’. Can they bridge their divide? Is one culture responsible to reach across, as it were, halfway? We might define an obligation to come any distance according to power of authority. To be sure, imbalanced authority does seem a constant throughout history; for exactly this reason, though, would we expect the side with authority to yield?

I turn to Dr. King. In his time, a generation or two before mine, Dr. King sought and fought for equality and “the cause of peace and brotherhood,” there surely being little more equal than “a single garment of destiny” (King, 1963). As we are all, he claimed, paradoxically yet beautifully this makes us one. Standing upon the authority of centuries, of historical proclamation and practice, and there resting in long studied philosophy and lived experiences of spiritual belief, Dr. King challenged his brothers to bear witness upon themselves. Such authority remains as stable for those to come as for those preceding – that is, unless or until those to come decide to rest authority someplace else.

In our time, justice supersedes civility, and restitution tinges redress. The zeitgeist these days is emotional, distinctly angry. Individuals possess rights, and cultures bear responsibilities. “The politics of identity,” Benson says, “multiply conflicts and divisions.” As we ostensibly advocate for the equality of all individuals, identity politics fights a culture war, a battle for equity across cultures-of-particular-individuals, which actually precludes a wider equity. Cultural equality has supplanted individual equality because, where there is axiomatic ‘strength in numbers’, multiculturalism can only ever be ‘us vs them’. If so, is it still defensible? Is multiculturalism a way to ensure that our outcomes match our aims? Or are the aims of those with authority forever destined to pre-empt the aims of those without it? Indeed, what is the way to ensure that no one of all will ever be marginalised?

For one final point I turn to Benson (2020), not in comparison to Dr. King but out of respect for all being one: “Only when we stop having identities in the group-defined sense can we return to being individuals” (original emphasis). We may discover too late the folly of burning a bridge-too-far while crossing it. 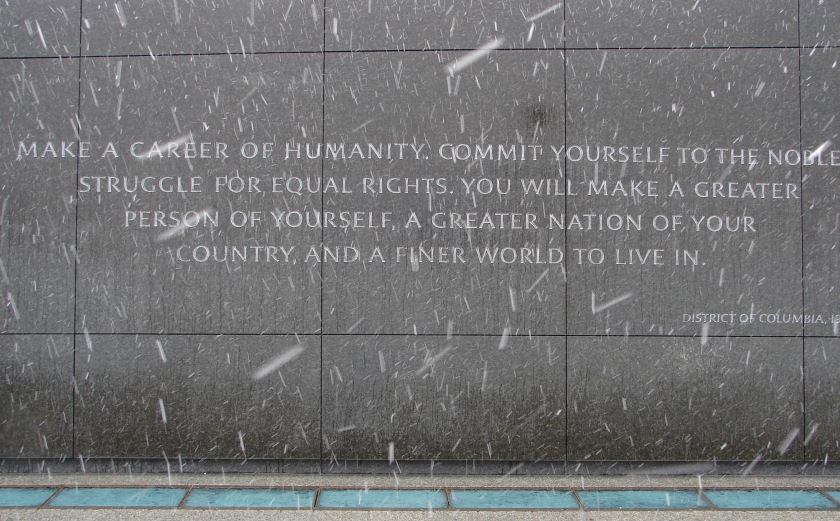 8 thoughts on “The Bridge to Hell…”